This time, I'd like to share with you a song that was released more than 20 years ago, but which had a big impact on the music scene at the time.

This is a solo album by Vinnie Colaiuta. The title is simply Vinnie Colaiuta! And check out the very famous trick in the first track, I'm Tweeked / Attack Of The 20lb Pizza.

This is how he plays from the beginning of the guitar theme. 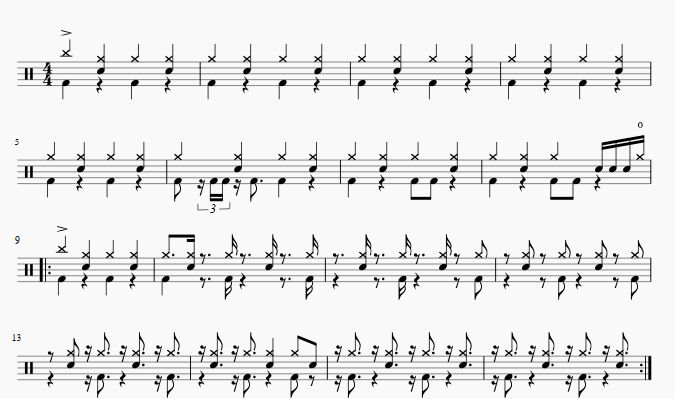 Of course, the focus of your attention is the play from the 9th to the 16th bar. As you can clearly hear, the normal rock drums pattern suddenly shifts by a 16th note, and shifts and shifts and shifts. People often describe it as if the needle of a record flew off or a CD skipped due to a reading error. This is a play that I would like to try myself while listening to the 8th note clicks. I can't help but respect Vinnie for coming up with a trick that has never been done before, and putting it into practice!

If I were to score it more accurately, it would be

If I were to score this pattern more accurately, it would look like this, with a tenuto-like hi-hat and a ghost note behind it.

The hi-hat is struck hard with half-open on-beats, and is struck just a little bit on off-beats. The right hand moves in 8th, but the off-beat goes almost a ghost motion only. Therefore, the first score is not accurate in rests. That is, it has too many rest marks because it has more tenuto. Instead, the first score is written for practice to make the timing of the accented hi-hat and snare backbeat clear.

If I write it as precisely as I can, it will end up being confusing at best, like this. We hate this.

A hybrid score with ghost notes on the off-beat 8th

It might be more practical and a little more accurate if I take both to make a hybrid as follows. In addition, I colored the areas where the needle flew off the record and deviated from the normal pattern. Green indicates the accent on the fourth 16th note in a beat, pink is for the third, and blue is for the second. I wonder which score is better.

I wonder if varying time of song is not in vogue

I'm sure many older drummers are already familiar with this song. It's so famous trick that is often referred to as "that thing on Vinnie's solo album". In recent years, I don't think I've come across such an interesting time-changing trick, but maybe it's not so popular. Maybe young drummers don't understand what's so interesting or what the elderly are so excited about.