Steve Vai the guitarist of my respect is back. Introducing from the mini-album "Alien Love Secrets", which has fewer songs than full albums. I do not know what he thought when he decided to cover himself in silver powder, but his having such idea is also where I respect.

Speaking of Alien Love Secrets, of course, we should keep our ears on the song Kill The Guy With The Ball which includes the amazing high-speed technical play by the drummer Deen Castronovo. (The song title of Japanese release is like "The Ball of Slaughter".) Analyze the high-speed play at the beginning of the song and give it a try! 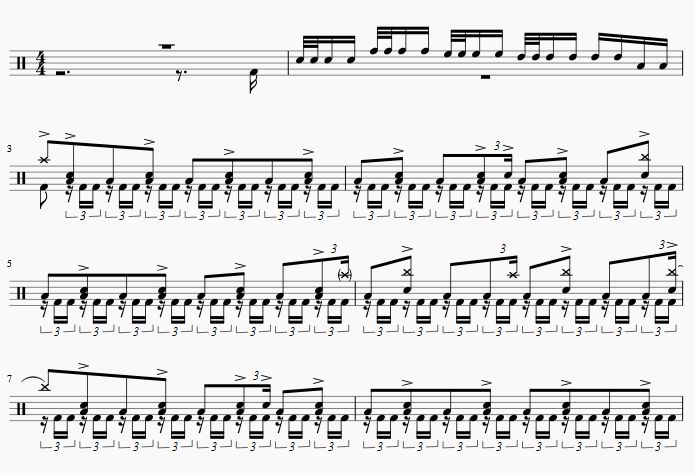 The song starts from the fill with snare and toms. In the 2nd bar I initially thought it is a fill with flams, but once I hear it in slow playback speed, I found it is with 32nd notes instead of flams.

From the 3rd bar, a strange guitar play sounds as if a man is speaking begins. At the same time, the drum part starts with a revolutionary triplet pattern the world never heard. He achieved the low-pitched and seamless high-speed triplets using the three: right-hand floor tom -> right-kick -> left-kick. While he continues these triplets, he changes the position of snare backbeats and occasionally strews cymbals and toms with the left hand. Also note that accent marks are attached to all the snare notes since the low-pitched triplets look too massive in the score to visibly see snare notes.

My eyes are getting tired because of the score with a lot of triplets. When you play it on a drum kit, your right hand and your both feet may soon approach your limit. However, we came only 25 seconds so far. The strange guitar play gets more excited from here, and just before the riff, the intro part reaches the climax with the blazing fast 32nd notes! 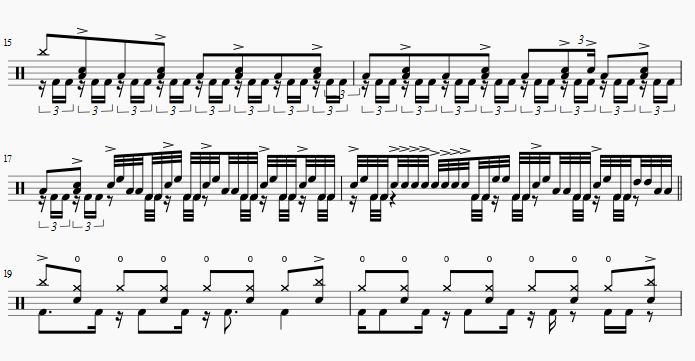 The length of the song so far is 36 seconds. My score transcription time per second (of a song) records the highest level ever. No, it really doesn't matter. The problem is the 32nd notes fill in 17th/18th bars. If you look closely, you see he did not play at random. The position of snare notes is the clue. Looking at the first part of the 32nd notes, we can see that 6 + 4 is repeated twice. Also, in the first 6 notes, the same sequence is repeated. That is, snare + high tom + floor tom + floor tom + kick + kick. The difficulty level is high because the stroke speed is simply fast, but I believe you can play it once you understand the 6 + 4 sequence.

I checked out the information about the super drummer Deen Castronovo, it seems that he is a good singer as well. Furthermore, the topic reffering to a sort of an arrest by assault comes out in search results in higher search relevance. It is unfortunate that Assault and Battery is the word used to represent drums part in a band. We came down to a bad end but see you soon.