All right, let us continue! We are going to check the second half of the album titled song Aja from Steely Dan's album Aja. 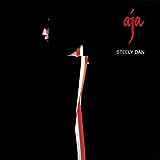 Just like the one in the middle part of the song that we covered in the previous article, let us see the drum solo that fills the niche of the song and the pattern during fading out at the end of the song.

The drum solo gets raging from the 3rd bar Auftact. Before coming to this drum solo part, the song goes with a cool and mezzo forte section, so the big gap of this sudden fortissimo drum solo attracts listeners first.

The drum solo continues along with a variety of phrases including the Steve Gadd's golden phrase. And the next moment, with the cue of the fill-in in the 18th bar, it changes into a brilliant samba pattern like this:

This samba pattern is also his specialty. It's a Latin like pattern with a unique feel and groove, sometimes called the Steve Gadd Samba. His left foot always kicks the hi-hat to splash it in quarter note (On the music score, "○" (circle) should be put on the left foot hi-hat notes, but I omitted it to make it look simpler).

It doesn't look like technically impossible, but when I play it, I cannot reproduce this Gadd-style driving groove. Perhaps that is because the pattern requires whole limb mobilization which makes it difficult to accurately place notes on 16th notes and to control dynamics (intensity of sound). Gadd has an excellent skill for rudiments like paradidles, and this basic techniques can make a big difference in the groove of this pattern. In addition, the subtle intensity of the sound, which is hard to describe in the score, is considered to be a decisive factor for this feel. It's a groove at a level that you can't easily get close to!

Check out the Steve Gadd Samba in the series of Golden Classic Tapes. It's a bit different from the pattern in Aja, but it helps you to imagine how he played Aja:

Of course, I'm amazed again at how talented he is! That's fairly legendary.