I'm going to add an insurance article further to put the game out of reach! Keep it Greasy of Frank Zappa four times in a row! 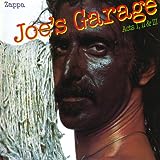 I found a person showing off a drum solo in 19/16! His name is Gergo Borlai. I have not checked in detail, but he is apparently a technically skillful drummer having big-boned and large body frame. His athletic shoes that basketball players typically wear reminds me of Kozo Suganuma known as "TE-KAZ-OH" which means the king of many strokes.

The intense technical play style makes us stunned. The outro part of Frank Zappa's original song also repeats 19/16, and we can hear a noteworthy drum play like that. Here I found from 3:24 Gergo Borlai played a trick which Vinnie Colaiuta never did! Your attention:

You noticed that the hi-hat keeps 8th note intervals all the time, despite the odd beat 19. It is a trick that makes us hear a constant beat in odd meters, switching on/off beat accordingly. The hi-hat is onbeat in the first bar, and is offbeat in the next bar, then comes back safely. Vinnie Colaiuta may not dare to play out the trick. Perhaps because he might think everyone in the band would get confused without his clear guide for 19/16.

The trick is often heard if the song has 7/8 time. Yes, you may be familiar with Jeff Beck's Led Boots. When you are in 7/8 you can play the trick without effort, feeling 8th note on/off beat. But here, it's on & off with 16th notes in this fast tempo! It makes you really uneasy as to whether the 8th notes hi-hat falls into place properly and returns to onbeat after two bars. He seems to perform it easily as long as I watch the movie, but as a matter of fact, strong mental power and good reflexes are required. Although it is hard to play, you may not think it's a notable performance by its appearance. A performance like a Buddhist monk's practice to find inner wisdom which tends not to be understood.

19/16 may be his favorite. He performs drum solos in 19/16 various times. Watch this video for another version. You also see his valuable drum lesson.