How's your life with drums going? Well, let me persist with Steve Jansen since I took up a song of Japan last time and I got curious more about his performance. 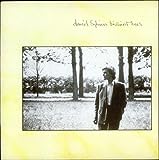 Let us see the first song "Pulling Punches" recorded in David Sylvian's solo album "Brilliant Trees". Yes, that is David Sylvian of Japan that Steve Jansen participated in. I have no idea, but there might be feuds among members or mental processes around them. Let me omit it and here I just check the music and sound.

Here's the drum part from the beginning.

I get an impression that it is artificial due to the unusual position of accents. The orchestral hits are on the initial 8th note offbeat and the accents of hi-hat are intentionally put on certain positions. Such artificial patterns go on in a deliberated manner in each phase (1st and 2nd verse, chorus, etc.), and fairly adhere to the plan through the song.

Then from the 2nd verse:

A fill with toms and with snare in the 4th bar is just before the chorus, then the slightly muted China cymbal blows out! I highlighted it on the score in red. Like mentioned in the previous article, the glittering China cymbal is just simply cool! He strikes China cymbal instead of crash cymbal at the turns of the song. That draws a line between this song and other vocal songs. Immediately after that:

2/4 inserted in the chorus unpredictably. You hear a simple fill just adding subtle intonation to toms on this surprising 2/4. Tastes great, less filling. It is so unpredictable that I highlighted it in pink on the score. It is tasteful because it is simple. Also note how powerfully the Chinese cymbal highlighted in red explodes.

Listening to other songs of this album "Brilliant Trees", all are well-planned in detail ("Nostalgia" is particularly evident). It seems that most of all drum patterns are looping by a computer music sequencer. But he does not really use a sequencer. I think Steve Jansen likes to play those manually and in real time. Not masochism, but a meditation. He plays as if he were a machine to produce a loop and achieves his deep meditation.