I've been continuing to listen to the songs I used to listen to, and I've rediscovered one that I have to mention just like last time. This time it's Yosui Inoue! 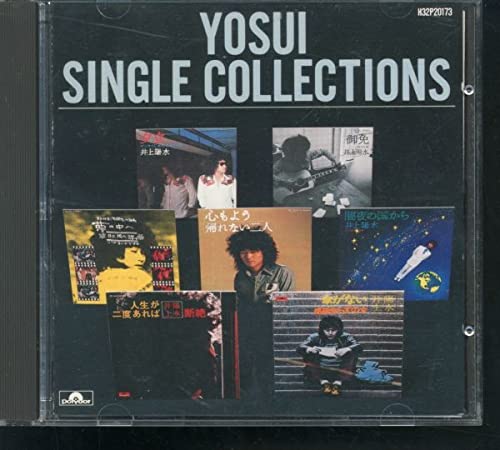 Why is Yosui Inoue on this blog? It's about Japanese folk songs with nice harmonies, right? No, it's a very hot song with a very good funk rock groove. Listen to this song Yuudachi from the album YOSUI SINGLE COLLECTIONS. Yuudachi means in Japanese a sudden heavy rain in the evening.

Funky section and 3 beats towards the very hot!

From the beginning to the end of the 1st verse: 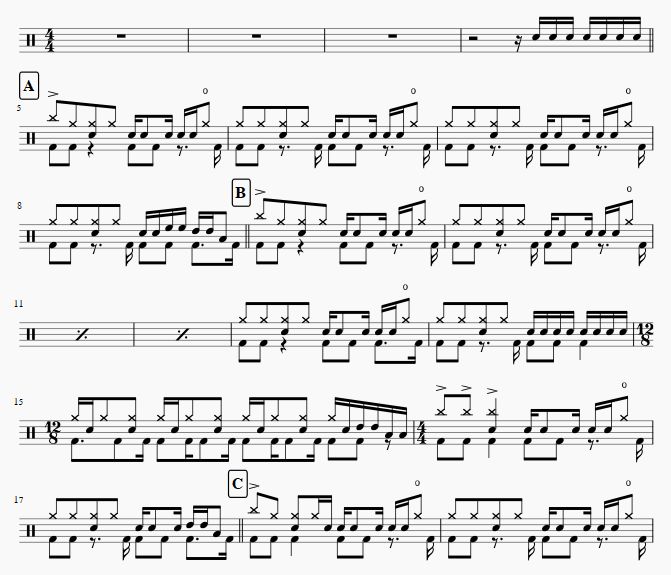 A funky intro involves a guitar riff and rhythm guitar. I don't know how to describe the style of this intro part properly, but there are many ways to describe it. The basic drum pattern starts at 'A' on the score, and the song comes in at 'B'. In 15th bar, there is an interruption of 12/8 (or two 6/8s). This sudden 3 beats is so effective that it can be a major feature of the song. Immediately after that, the "ru-uh-uh!!" at the beginning of the 16th bar is simply hot.

In addition to the drums, we can hear the near-zero sustain sound of rototoms or something. It's like the sound of raindrops hitting a tin roof, adding to the sense of urgency and realism of the sudden heavy rain. This tom-like sound also makes it difficult to distinguish the snare sound of the drum kit. It is hard to distinguish everything though, I found a lot of kicks with 16th note as you see in the score. I didn't recognize it when I listened to it normally. I used the equalizer to increase the volume level of the pitches from 0 kHz (the heaviest bass) to about 80 kHz, and I could hear them clearly.

A beat that should not be in non-instrumental songs

Continuing from around 'C', where the second verse of the song comes in: 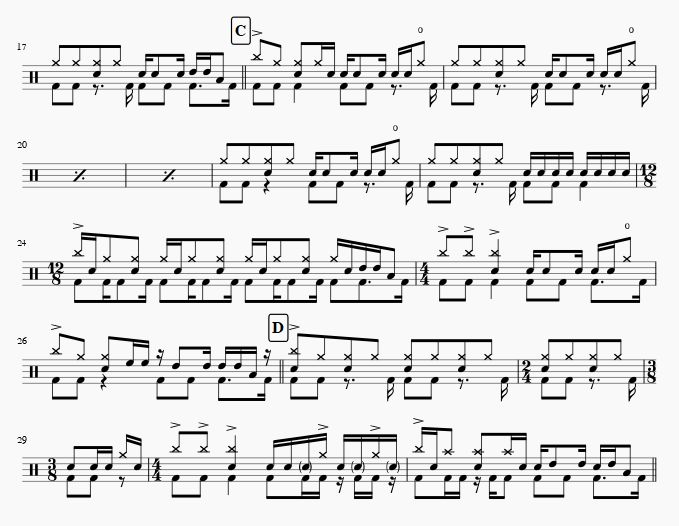 In 24th bar the 3 beats comes again. After that, from 'D', the snare starts to hit on-beat quarter note, and Yosui finally shouts out lyrics that can no longer be expressed in any words. And the next moment, 3/8! How could it be when such a beat is inserted in an non-instrumental song? And yet, it's so natural that you think there's no other way to play this song. This is amazing. I wonder who came up with it. Also, the phrase with the hi-hat in the 30th bar is a nice little phrase that I want to copy.

20 years ago I happened to have a friend who used to listen to the album YOSUI SINGLE COLLECTIONS and he recommended it to me. That's when I started to fall in love with songs of Yosui Inoue. I was completely attracted to his good voice, not to the drums or the grooves of his songs. I highly recommend listening to his vocal if you haven't done yet. His voice is so pleasant that it's almost a cheat. It's not fair. I just want to attract people with a good voice.