Hello! Let's see another song from Prince's album "The Rainbow Children" who passed away last year. I have very little hardware but own his signature snare. Yes, he is John Blackwell, aka JB. Today we see the song "Everywhere" to reconfirm the JB's performance. Experience and go through the JB's Mystery Adventure!

See also the past article:

At the beginning of the song, the clear female vocal sounds sweet through the serene Rhodes. The bass cuts in there. And when the digital and ungentle orchestra hits come in, the intro starts from the drum fill! 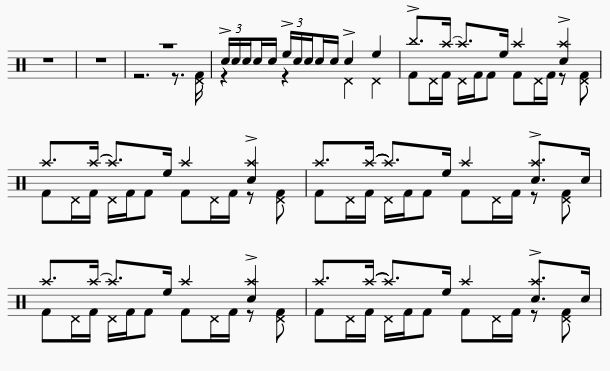 Noteworthy is the basic pattern stars from the 5th bar. That is certainly very unique. It would be a normal pattern if all the left foot hi-hat comes on 8th note offbeat, but here you see a distinct Latin-like pattern. What kind of practice made him play such like that? Utterly incomprehensible, really. Since he plays without hesitation, it may be one of his usual patterns.

The tempo is fast so the double kick on 2nd beat is quite hard as well. At least I declare that I cannot keep it at this tempo through a song. A dignified concession speech!

Next, check the colorful and exciting drum solo! 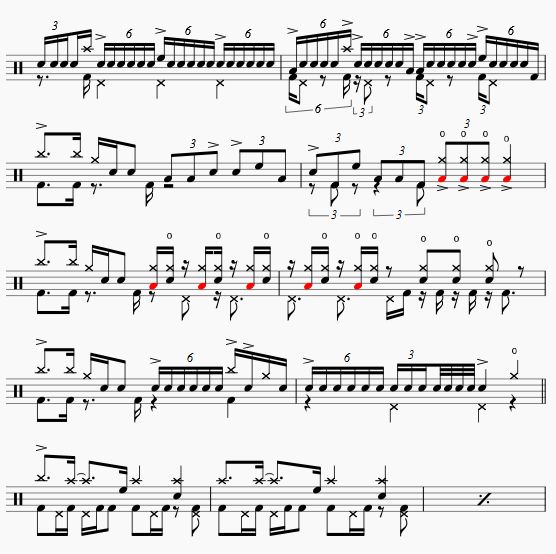 The sextuplets phrase steamrolls in the 1st and 2nd bar. He puts accents to the 1st and 6th of the sextuplets, hitting toms and cymbals to give it a variation. In the 2nd bar, he steps on hi-hat by left foot at the positions where are beyond human control. But you do not have to worry too much because it seems he moved his left foot just like when we usually play "hi-hat open + Kick -> Immediate hi-hat close".

And at the 8th bar, drum solo closes down with snare mashing. I thought that the 2nd beat was normally 6 strikes, but I found another snare strike and I knew it was 7 when I heard it in very slow playback speed. It may be a septuplet, but in the score above I write four 32nd notes. In any case, it would be OK to try your maximum snare mashing with alternate sequence.

And the part just before outro of the song is way too massive: 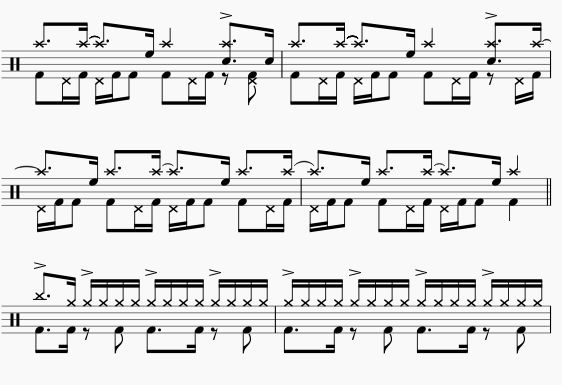 The 1st/2nd bar is in the basic pattern. The 3rd/4th bar is a part of the keyboard ensemble phrase for entering outro. Take a close look at the drum in the 3rd/4th bar which changes in response to the keyboard phrase here. As he realizes it with this fast tempo, it is almost impossible to imitate the play. You do not understand what I'm saying, but it is neither a fill nor a temporary pattern change. It is not such a simple thing. A revolution sparks on both feet.

Aside from above, my band performed the first single-band show (having no other bands in the night) the other day. I brought the JB's signature snare drum that I do not usually bring to studio rehearsals saying "Here comes a golden opportunity to utilize it". The huge "JB" mark is appealing on the shell, having 13 inches diameter which is smaller than the commonly used 14 inches, being slightly deeper (6.5 inches).

In my live performances, I usually borrow a snare drum a live music club owns. Depending on the club, a snare head and snare wire/cords are almost dead so that I cannot adjust the sound in some cases. For that reason it is safe to bring your own snare. Nothing special here. In the single-band show I identified myself with JB using the JB's snare. I'm not sure the audience found a difference.