Let's see a film music this time. There aren't many films that focus on the drums. But 4 or 5 years ago Whiplash (Japanese release title: Session) moved squarely into the spotlight.

I watched it of course. Drummers would not be very much comfortable looking at it carefully, which will be discussed later, but I was moved a lot. Instead of a movie critique, focus on its music that definitely moves you! 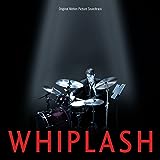 Mercy! He starts playing without a cue

In the song Caravan from the last scene, this drum performance is awesome groovy. A big band arrangement that is exhilarating and has no muddy. This is very much a moment of high drama. While the conductor who easily gets mad at a little thing is saluting, the crazy boy starts to play without a formal cue!

The passion behind this stylish performance! This is probably the best arrangement of various Caravan recordings. Really cool. See what is happening: 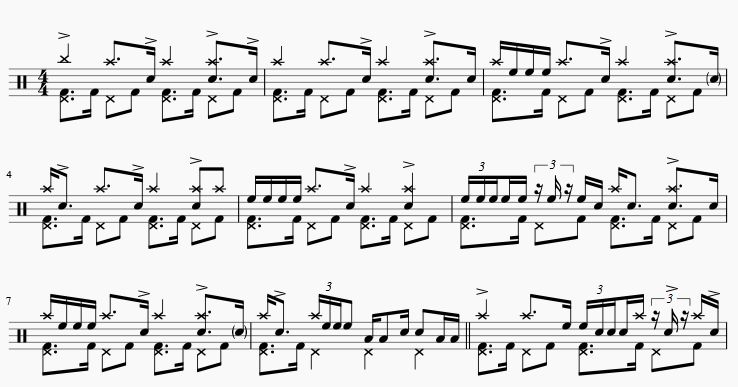 The essence of the pattern is shown below. It is important to kick exactly on those positions and put the snare drum accent on the 2nd beat to create this wonderful beat.

It sounds like the basic pattern is repeated equally, but there are actually three ways to step on the high-hat. First, onbeat quarter notes like in the intro. Second, offbeat notes like jazz four beat drums (Figure A). Third, 8th notes all over (Figure B). The top cymbal strongly leads the four beat feel in the 3 patterns as well, but it is interesting to find subtle differences in the grooves. The pattern of Figure B is the most powerful, isn't it?

I think I worry too much about little things!

We don't know why, but notice how the film runs in reverse around 0:51. One who has an acute observation skill pointed that out in YouTube comments. I can't tell, but someone commented that the drummer shouts a 4 letter word at the conductor at 0:46. In addition, the bass player appears he is playing at 0:21, but this obviously contradicts the scenario. How did they discover those.

Now that you mention it, I remember the film titled Sweet and Lowdown that made me nervous because what we see and what we hear did not synchronize. I couldn't get the storyline into my head because I noticed big gaps between the sound and the fingering of the guitar, and the style of Django Reinhardt may not be considered. It amazed even me that I worry too much about little things. As a drummer, I also found such gaps in Whiplash, but it didn't affect the storyline at all. I highly recommend to watch it if you haven't yet.