The situation has worsened to the point of declaring a state of emergency, and my office has been closed. Nowadays, I spend more and more time just listening to music. I've been listening to songs all the time, and I keep coming across songs that I've missed in years.

This time, I was deeply moved by the song I listened to the most, SNAIL RAMP. It's a nostalgic ska-punk/ska-core music. From SNAIL RAMP's album FLATFISH COMES!, I can confirm that even though it's been more than 20 years, their music has not faded! 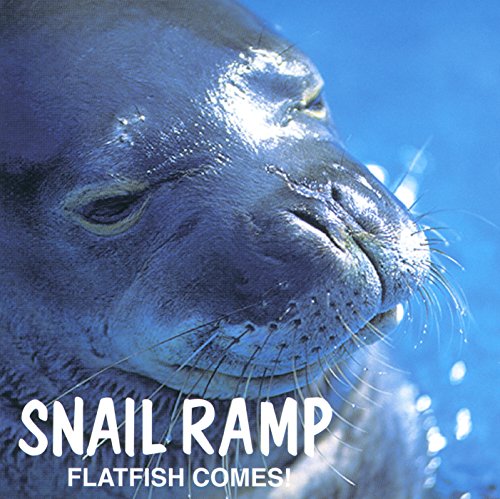 It's rather not that hard to play here 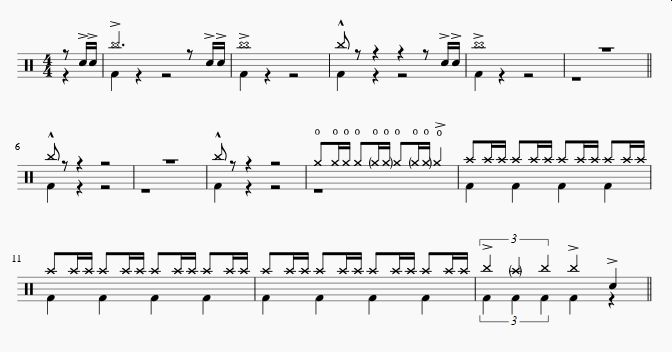 ISHIMARU, the drummer, is just so good. I think his play is what sets SNAIL RAMP apart from other bands. I want to check out every song in detail because his play is just perfect for every song on SNAIL RAMP. Meanwhile this time, I chose this song STEP BY STEP as an example because I had covered it in a punk band I was in over 20 years ago.

After I played this song in the band, one of the audience told me that the first part of this song (i.e. the 1st - 5th bars in the score above) was fast and amazing. And he said "I can't do that like you!" It's not that difficult actually, but it seems to be a phrase that attracts people's attention for some reason.

The part in the middle of the song where the guitar solo starts! 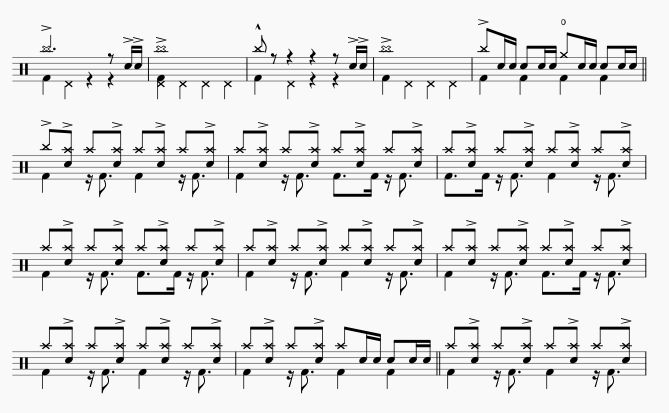 From the 6th bar, he goes with a common pattern of punk drumming, but the time feel, dynamics, 16th note backbeat kicks, etc. are perfectly integrated, so he upgrades the pattern one or two ranks higher. He controlls very well with that ultra-high tempo about 200 BPM. It's great.

Although I picked up this song to focus on the drums, my most favorite songs of SNAIL RAMP in general are the other ones. For example, the second song on this album, BREAKAWAY, is like a godsend. We hear a miracle that all the inevitability and coincidence work together, such as, selection of the cover song, the sound of piano, roughness, etc.. Other great songs are A WOMAN WITH A STORY and STILL, from the album MR.GOOD MORNING which is known to have all tracks are great. Maybe it's just that I like the combination of punk & piano or punk & strings. Listen to them if you haven't done before. You can see what makes SNAIL RAMP so different.