Let me stand next to your fire! So, this time it's old as well, Jimi Hendrix's Fireeeeeeee! Let's take a look at the legendary performance that drummers must try! 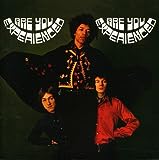 Mitch Mitchell's performance lives in the legend. You might think he does not play with much variety of phrasing somehow, but his unique and rather enigmatic performance seems to have influenced a lot of drummers. His big influence on future generations is still great now.

Well, let's go from the intro. The guitar and bass initiate the very simple phrase. The drums fill the space with the snare and toms. Since the song starts with Auftakt, you initially cannot see whether you are on or off beat.

Next, just after the intro, the vocal comes in and the drum pattern starts. The guitar and bass repeat the simple phrase again giving a room for drums and Jimi's soulful vocal. This section is like a conversation between vocal and drums.

What is great is the red highlighted snare notes in the score. This drum pattern with displaced accents like that is the most important play that characterizes this song. You cannot talk about Fire without this part. After the song came up, there has been hundreds of cover versions and countless numbers of non-recorded performances. Certainly that pattern or something similar may be played in all versions and performances. No doubt it is not Fire without it.

Also the play immediately after that is characteristic. It is a phrase that fills spaces with a left hand snare in 16th notes. It does not seem very important, but the phrase is also a must when you play the song. 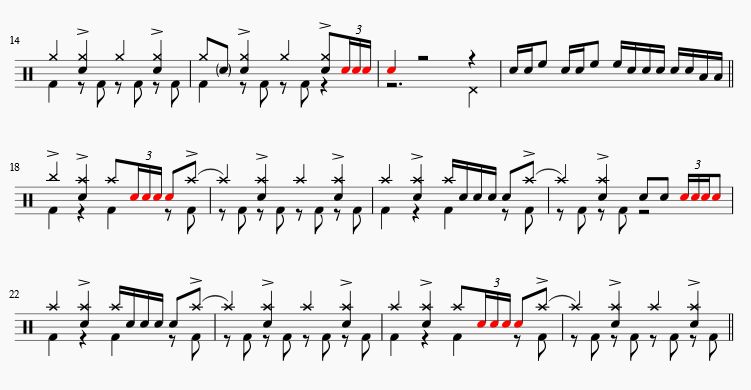 Speaking of Mitch Mitchell, the quick triplet phrase (highlighted in red above) is occasionally inserted here and there. It is also necessary when you play identifying with him. It's also possible to play it with a sequence that includes 2 left hand strokes, in order to finish the 4th accent with the right hand and to balance your sticking (describing in right handed). No, do not balance yourself with such a weak-hearted sticking. Do not try to be stable! Play it with alternate single stroke wildly by instinct.

When I listen to Jimi's songs once again, it would be a cliche, but I cannot believe that only three musicians really performed those. The former bassist of The Animals, Chas Chandler once said, "I thought that three guitarists were playing at the same time, but in fact I was surprised to know that only one guitarist there." So Jimi's contribution to the band may be the largest. However, a cliche again, I think a 3 piece band has unlimited potential even though it is a minimum level form. At the same time, I also flash back to our unlimited potential that I felt when I was forming a 3 piece band in my young days.