Frank Zappa (Keep it Greasy in particular) gets nonstop so far, so let's check out this time another artist. The inevitable for every funk enthusiasts, Maceo Parker comes in! Let's listen to the exploding groove in "My Baby Loves You" from his album "Dial: M-A-C-E-O" released in 2000. 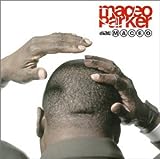 The drummer is Jamal Thomas. He seems to be currently active in the self titled The Jamal Thomas Band. Listen to the funk groove gushing from his instinct:

From the beginning of the song, hi-hat chitchats dynamically with/without accents and solid kicks respond to the bass. Super elastic bass in 16th notes is combined with the drum pattern to generate an explosive groove. In addition, a treble (high-frequency) scratching sound like maracas added as a secret ingredient is very effective. The fill corresponds to the horn section just before the verse (7th and 8th bars) is also groovy and stylish. It is an exhilarating drum play, fully leveraging the sharpness of the horn section. (The red highlighted notes on the score are the horn section's accents.)

As well as that fine drums, the proficient performance by other skillful musicians including Maceo, of course guarantees the ultimate level of groove. I want to play in such a band! No, I don't say my mates in my band are poor. I never ever.

If that helps anyway. When you search Jamal Thomas, you will find an actor known for the drama series "Gray's Anatomy",

or the person who belonged to Academy that raises the youth of the football team "Aston Villa" committed a crime.

Both persons are entirely unrelated to the drummer of the song. Check Jamal the drummer described here: