The drummer is Martin Valihora. He was probably her former schoolfellow at that time when they were at Berklee College of Music. I recommend to check out a lot of videos of his performance uploaded to YouTube. You will get caught up in his performance combining the speed and the groove, and cannot take your eyes off for several hours. I'd like to suggest that you start watching only when you have much time! 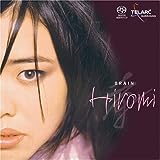 It was probably the session at an open air stage of FUJI ROCK FESTIVAL in 2005, when I heard Hiromi Uehara for the first time. I remember it was a radically hot performance. I luckily happened to be close to the stage. In addition to smooth piano jazz music, songs full of tricks generated my hot excitement. Also, I was impressed by the sound of the drum, especially of the snare drum which was remarkably light and crispy. When I listened to their CD later, I found almost the same sound was recorded, so I think that this is the sound he wants to produce by his tuninng drums properly. How can I tune a snare drum to make this sound? Only his own snare drum can do that? I would like to know how!

From 3:10 of the song, it goes Accelerando (gradually gets faster) and reaches to a fairly exciting tempo. The keyboard solo like a guitar solo from 3:44 is very exciting as well. Then a quite technical drum solo comes and after that here is the high-speed ensemble part: 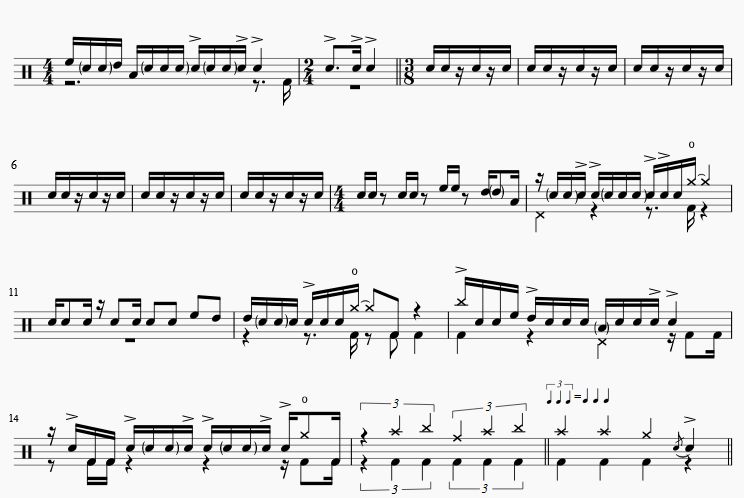 The 1st and 2nd bars are the end of the drum solo. From the 3rd bar the entire band plays along with that rhythm format. I like this kind of formatted section full of tense feeling. The bass and the keyboard are harder than the drums because they should not mistake the melody as well as the rhythm! I'd like to show my respect for players who control definite pitch and melody. As for drums, swapping toms and snares do not instantly mean a mistake. My hat is off to you.

At the end of this section, in 15th/16th bar, I find a metric modulation that reads a quarter-note triplet as 3 quarter notes. And immediately after the above, it returns to the original tempo all at once!

When the FUJI ROCK FESTIVAL's live performance, I remember that the biggest cries of joy from the audience erupted in the 17th bar showing this intense "slowdown". I was just fascinated. Also, although it is a small detail, there are bongo-like taps in the 18th/19th bars. Do not miss listening to it since that boosts this relaxing groove.

The 15th/16th bars make me think "It is an extremely sophisticated musical composition that makes use of metric modulation to change the tempo". Whereas, It is also likely that they synchronize each other with only their eye contact. What is the real truth!