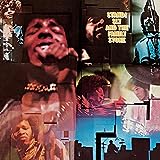 I once thought the players were all black people because the band is one of the birthplace of funk music so I got an unexpected surprise by watching their performance in video recordings. The funk groove is thrust out by a white drummer Greg Errico. When talking about the groove It don't matter if you're Black or White!! (Excerpted from BLACK OR WHITE by Michael Jackson). Well, as for the drum play that counts, it is a really tight groove without muddy. Let's go into some details.

A basic pattern from an impressive short intro.

The most important thing is this absence of metallic stuffs at the first beat!

A metallic stuff just means here a musical instrument with metallic sounds such as cymbals and hi-hats. It is effective in great deal not to beat it at the first beat. Neat and simple guitar stroke sounds clearly and it somehow is giving a sense of tension. Do you strike a cymbal casually by force of your habit at the point of song's phase change? That play alerts us not to stop thinking!

Then, the following pattern comes after the above. Hi-hats are played in 8th notes now.

And it is noteworthy here is the absence of extra accents!!

When you listen carefully, you see that he plays with no accent on the hi-hat. This greatly affects the groove. It is different depending on the person, but you may usually strike your offbeat weakly. But this is wrong. This groove cannot be realized unless you hit them all evenly. I have to be aware of it since I put accents and non-accents inadvertently. Instead of controlling flexibly with wrist strokes, try fixing your wrist, gripping your stick strongly and pushing out your whole arm.

This song is packed with remarkable points so it cannot be introduced at once. That itself is surprising. Next is finally the second half of the game. Half time show will surely come to your mind.