Let's take a look at an Italian Latin alternative band Talco! I checked what kind of band Talco is on this occasion, and found that they are inspired by The Clash and Ska-P. Knowing that there is an influence of Ska-P who I picked up previously, I think something catching that I'm not unaware have been attracting me.

Their style is in a category called "Patchanka". Patchanka is Latin alternative or Alterlatino which features a sound that mixes alternative rock, electronica, metal, new wave, pop rock, punk rock, reggae, ska, traditional Latin American music, etc. All right I do not understand.

Talco's music goes basically with power-chord guitar riffs. The particular chord progression Im - ♭VI - ♭VII - Im (e.g. A#m - F# - G# - A#m) appears in multiple songs. I would say that appears in a bit abnormal frequency. Strangely enough, however, each song is unique. Their horn section sings steadily in most of songs, and their songs are characterized by remarkable catchy themes and melodies. Listening to their songs always force me to sing together.

In fact, hearing Talco's live recording album "10 Years - Live in Iruña", audiences sing along to almost all parts of the songs. This is really amazing. The audiences are singing all melodies completely. Of course not only the lyrics part, but also the horn's melody. What is extraordinary here is they are singing the guitar riff as it is. I understand the feeling of the audiences. I want to sing along to everything! Cool as hell.

From such a catchy band Talco, let's see the song "Signor Presidente" from the album Tutti Assolti. 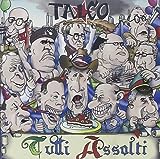 The basic pattern is the high speed thrash beat pattern commonly heard in metal and punk music meaning the pattern in the 17th bar on the following score (How do you call it? Two-beat?). Because bass drums of the basic pattern are a bit clumsy, maybe he did not use double bass nor a twin-pedal.

After that, the song came round, it suddenly switches to an awfully cool horn section and drums go with the ska-like pattern like this: 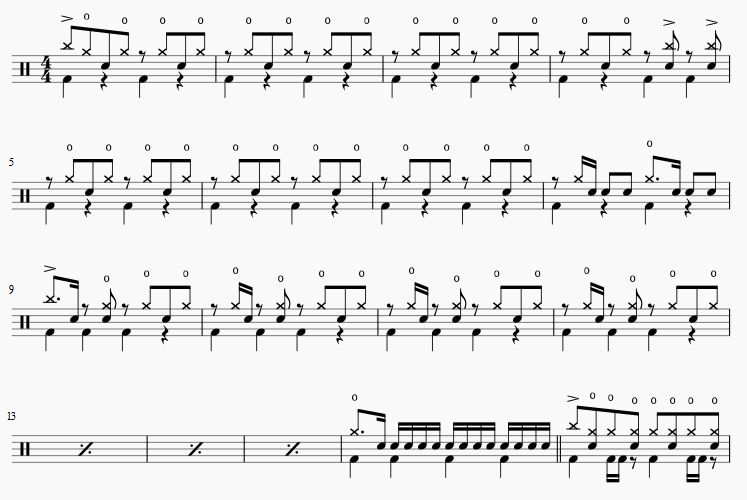 I picked up here because I was concerned about the pattern starting from the 9th bar. Although it seems normal, the position of the snare accents is actually a bit tricky in the 1st and 2nd beat after the 9th bar.

Until you come to the 9th bar, snare accents are on the backbeat (the 2nd and 4th beat). After the 9th bar, there is accents at 8th note offbeat of the 2nd beat and the 4th beat, and it sometimes matches with the right hand hi-hat and sometimes not. Perhaps it may come from a drummer's own autopilot. The phrase sounds easy but you could get awkward around the phrase if you have never moved both hands like that.

I looked into a rather small detail this time because I thought that I could not catch it up unless I transcribe and analyze it. A sort of my personal memorandum. I transcribed and analyzed it and now I can play it. And they all lived happily ever after.