Let's enlarge "I Wanna Take You Higher" from Duran Duran's album "Thank You". All songs in this album are covers and a lot of guest musicians are participating in it. Tony Thompson, who was playing in Chic and The Power Station is the drummer on this song. Enjoy that power groove! 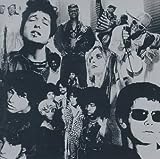 Let's see the play from the beginning.

A transcript will be like above If you try to accurately take it down in score including grace notes. As that looks somewhat complicated I write it simply:

The hi-hat has accents on 8th note offbeats and the grace notes are inserted as 32nd notes where there is a space.

I've written it on the score like it is easy, but the double kicks in 32nd notes are amazing. I would like you to listen to it carefully. You may find that is never missing a note or going off tempo in any way!! He does not lose funk groove essentials and at the same time this massive solid feel!

Then immediately after the above opening pattern, it turns to the on-beat pattern with open hi-hat and snare attacks, as shown below. Here again the 32nd note double kicks are shot repeatedly and his stable right foot technique appeals. While listening to its right foot, dynamic strokes that sometimes hit with all his strength and sometimes put delicate grace notes promote grooves.

"I Wanna Take You Higher" is, yes, a hard funk song by Sly and the Family Stone. I encountered this cover before the original song and I listened to the original song later. I thought it was not what I expected because of its surprising Lo-fi sound. When comparing cover and original songs, the majority of people may think the original version is better or the best. However, this song probably wins against the original song, doesn't it? Regardless of the technique, the drum play of this song simply knocks us down. Again, please listen to the song carefully with your canal type earphones in a quiet place. I bet you cannot keep still. The dancers just won't hide!! (Excerpt from Dance To The Music, Sly and the Family Stone)