¡Hasta la victoria! We are going to see a Spanish ska-punk band Ska-P. The pronunciation of Ska-P is not "scope" nor "ska-pee" but [esˈkape]. "ska-pee" is comfortable to hear, but it is regrettably incorrect.

By the way, sometimes I get asked "why do you understand Spanish?". Because I started listening to Ska-P my favorite and that made me start studying Spanish. To acquire a foreign language, find a foreign favorite band and supplement it with Duolingo. It doesn't take a genius! 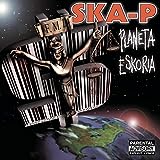 Ska-P's songs often go with straight forward rock/punk, but sometimes with ethnic or exotic world music tastes. Besides that, they have an awesome vocalist. His vocal technique is orders of magnitude greater to draw a sharp line between Ska-P and other ska-punk bands. They attract me since they are not just another ska-punk band. The stage name of the vocalist is "Pulpul". I cannot figure out if it is a typical stage name or has another meaning. (His real name is "Roberto Gañán Ojea")

Look into the performance, which is not straight rock/punk in the song "La Mosca Cojonera" from the album "Planeta Eskoria", 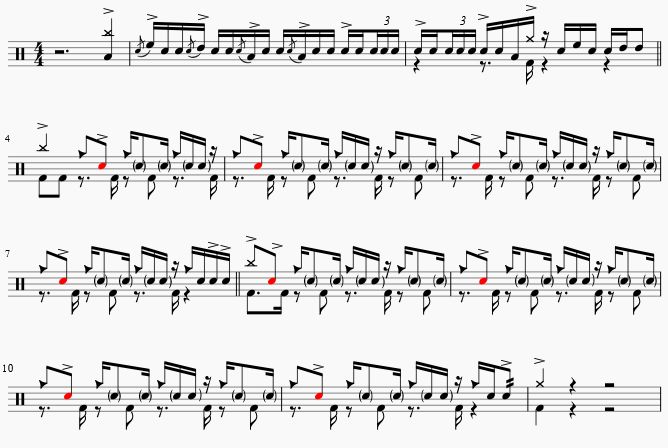 We get hooked on the drum solo at the beginning of the song and a latin like flavor goes from the 4th bar. It is a light and bouncy section with the palm mute (mildly muted with the side of the picking hand) guitar sound.

Perhaps the drum pattern makes us think that it could require a complicated coordination among hands and feet, but if you once play it you will find it isn't so. The difficulty is not a challenging (hard) level for a latin like pattern. Accents are placed on the timing necessary for expressing a latin taste, and effectively create a groove that looks complicated although it is not very hard. It is especially important to give explicit accents to the snare notes highlighted in red on the score.

It will be a more Latin like pattern if you put left foot notes like Horacio "El Negro" Hernandez, but the difficulty level might be destructively increased. A drum pattern that can create a Latin taste without much complexity is quite valuable.

See the past article for the performance by Horacio "El Negro" Hernandez with destructive difficulty:

Also, it is fun to try playing this pattern casually on a sound check before a live performance. When you are told by a PA engineer of a live music club "Please give me the entire drum kit.", play the pattern above instead of a simple quadruple drum pattern. The pattern makes other bands' drummers listening to it think you are a quite skillful drummer. They may be surprised and inevitably you may earn respect from them. Just have a try.