Everyone surely remembers the group "Japan". We are going to take look at the song "Visions of China" from their album "Tin Drum". 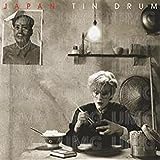 "Japan" is the name of the group! Did they name it saying "It's exotic and cool to be a name of a country anywhere in Asia"? Perhaps there was an episode around the naming, but let's put it aside for now.

Well, as for the drums, the Steve Jansen's thoughtful performance is stirring up the mood of the Chinese as the title of the song indicates. This is the basic pattern:

As long as I listen to the sound, I am not sure whether it was performed in real drums. But I believe Steve probably played it since I can hear some ghost notes. Something like oriental tams might be overdubbed a couple of times.

China cymbal is the key in this song. I highlighted the notes in red on the score. China cymbal in Visions of China is too straight, but the way I see it, it's exactly the Chinese style sound that I imagine. The 2 strikes of China cymbal connecting 4th and 5th bars are simply cool!

And this is just before the song goes back to the verse. Gradually instruments stop playing after the chorus. The drums stay playing with full of spaces:

A bouncing tom phrase and then we get one single kick. Wow! Even though the song is about to go back to the verse, there is no sound more than two 4th notes' long! A tasteful play making use of spaces. Do not make noise unnecessarily. Just because you have a room you don't have to fill it up.

At the time I was listening to this song well, China cymbal was not available around me and I did not have money. I remember that I stack a broken cymbal on top of another cymbal to make my own fake instrument by trial & error and got a sound like China cymbal. I was very hungry for the sound. Because of a rebound by overcoming the hunger of those days, now I always walk out my China cymbal and take it on band rehearsals. The origin of how I use my China cymbal is in this song (and Red of King Crimson). I'm sure you have such a song of your origin.