From Jeff Beck's album "Blow by Blow" released in 1975 (the Japanese release is titled as "the revival of the guitar murderer". That's weird), I'm going to analyze the song in detail you know what! 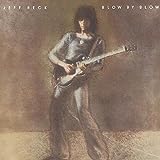 The drummer is the maestro Richard Bailey of course that I took up several times in this blog. See the articles describing the master's performance:

In this album, you can hear his performance being rough around the edges but the most powerful. He had the dignity of the master at a young age already. Among songs in the album, we are all curious about the drums on "Scatterbrain". This is the drums part with a bit unusual time signature 9/8 that fascinates those who listen:

The hi-hat open accents are on 16th notes offbeat and ghost note-like triplet notes are at the end of the bars. Listening to this basic pattern, you may think at first: it is performed in combinations of paradiddle (RLRRLRLL etc.) and must be something like paradiddlediddleparaparadiddleparaparapara..... However once I transcribe it, I found that except for the last triplet RLL, surprisingly it goes in alternate (RLRLRLRL). The magic trick wrapped in mystery for many years is revealed now.

Taking out only the snare and the hi-hat, the sticking sequence is like this:

Left hand hits the open hi-hat notes. If you fix right hand on hi-hat and left hand on snare trying to do it with paradiddle, you find you cannot hit three snare notes of the 4th beat and that is an apparent contradiction. I found that hi-hat does not tick at the same time as the snare of the 2nd beat. That was a clue.

Here is the part turning into a pattern using ride cymbal instead of hi-hat: 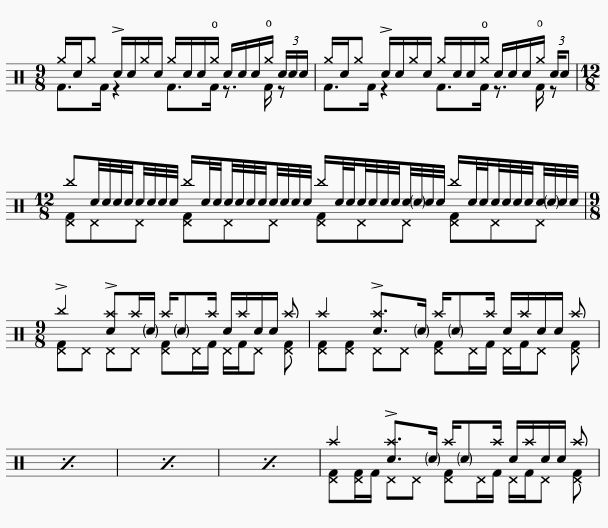 In the drum play around here, we should not miss listening to the hi-hat that keeps stepping by left foot. That is the master's specialty which is also discussed in the previous article:

The left foot hi-hat starts from the 3rd bar's 12/8. The volume is small but this makes us feel that the groove is effectively kept. That is the same idea as ghost notes on snare. And the play requires stamina so we have to start with a fitness training first. He always plays the left foot hi-hat during ride cymbal part so surely it is simply his autopilot. That is one of the autopilot systems we want to acquire in order to get closer to the master.