James Brown - Mother Popcorn (You Got to Have a Mother for Me)!

When I listened to James Brown again, I couldn't wait to see how this funk groove was generated, and I couldn't wait to try it myself. That is the song: Mother Popcorn (You Got to Have a Mother for Me). It was released in 1969 and has been featured on his various albums. Take the sort of best album 20 All-Time Greatest Hits! or Star Time Disc 3 ("Soul Brother No. 1"), etc. Some live recording versions should also be available. 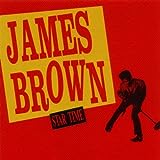 Mother Popcorn is a very attractive track for enjoying a classic funk groove. First and foremost, the phrase of the horns in sharp 16th notes considerably generates its funk groove. Clyde Stubblefield, the drummer of this song, goes like this:

The high-hat always ticks in big quarter notes to form the holistic and overall cornerstones to make a space in the song. Stabilizing the quarter notes, the snare backbeat is put at the 4th offbeat instead of the 4th onbeat. Of course, the horns are also sharply shifted accordingly. That is a correct funk drum cliche. The snare drum's ghost notes sound softly but quite essential here. He places the ghost notes firmly on 16th notes to align with the rhythm of the horns. It should be noted that the bass drum is not considered to be an element of this groove since it is barely audible.

I listened to this song with concentration to find out important elements for the groove. Finally, I found that a muted guitar quacks in the background like this!

A secret ingredient that will make the difference. The ghost notes are not alone in supporting this attractive groove.

The pattern described above is repeated by dozens of bars in almost exactly the same way. We can call it a background track while James Brown freely sings. There is only one more such background pattern in this song. That is accented on the first and second beats. I think JB likes this way of highlighting because it appears in his other songs (for example Cold Sweat).

The red colored notes indicate different parts from the 1st background pattern. This 2nd pattern is exactly repeated several times until after 1:48 and it simply returns to the 1st pattern. The rest is pretty much the same. Simple! The first hit at coming back from 2nd pattern to the 1st pattern is, again simply, just one opened high-hat. I don't think he ever hits a cymbal in this song, so maybe he plays on a drum kit without a cymbal. Then, the accent of the maximum volume would necessarily be opened high-hat.

This should take the world by storm and should be handed down to the present. Today I reconfirmed such an immortal groove.