Again a master's appearance. Let's confirm the planned drumming of Terry Bozzio. From the album "Spring Session M" of Missing Persons once called Synth Pop, "No Way Out"! 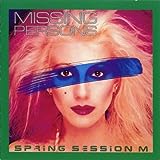 The lady on vocal who is singing vigorously is Dale Bozzio. She was the wife of Terry Bozzio at the time. The husband and wife were involved in the band and I feel that the relationship of trust and intimacy due to being a married couple were affecting their music somehow. There are some of such bands in Japan as well.

Recently I found that his wife is a Japanese woman Mayumi Bozzio. I was a bit surprised at the fact, considering Dale's unrestrained impression at that time. Anyway, the name itself is good. I want to introduce myself to people as Bozzio. Marry me! If a same-gender marriage is not accepted, I would like you to consider adopting me.

Well then from around the beginning of this song starts with unusual 4/4 & 7/4.

As you can see 5/4 or 7/4 are interspersed without hesitation. That is no wonder since the musicians participating are Frank Zappa relevant ones. Warren Cuccurullo on guitar. Patrick O'Hearn on bass. Warren Cuccurullo and Bozzios mainly composed songs.

They perform with real instruments instead of DTM, but are making a mechanical impression throughout the song. Except for classical music, etc., a drum performance is mostly free for ad libs, so drum transcriptions in many cases have a small number of repeat symbols on a score. Meanwhile you can see here they wrote down the song in the score solidly and well-planned. I used Dal Segno and repeat symbols |1. and |2. for the first time. They perform steadily what was written down on the score without making a mistake.

Excuse me but I return to the topic around Terry's wife at that time again since I got curious. According to Dale Bozzio - Wikipedia - Personal life she is active under the name of Dale Bozzio. She seems to still have her married name even after she divorced from Terry in 1986. Again I knew the name itself is good. I will also hold the name even after I get a cancellation of our adoption contract.