He is and will always be my hero! Steve Vai is my teacher, mentor master. Of course, an electric guitar that I have and usually use has 24 frets! Because it is not possible to trace master's play if it is 22 frets.

Well, I'm going to tell you about the album "Sex & Religion" when the teacher formed a band named "VAI". 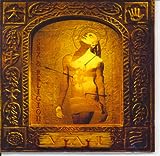 On the liner notes of the album, I remember that there are an illustration like a samurai that seems to be committing seppuku and a soul going back to the sky from the samurai. It seems meaningful thinking about the impression of musicians participated in this work who embody overwhelming arts. From such a profound album, let's take a look at the song titled meaningfully "Here & Now".

The drummer is also my teacher, mentor master, Terry Bozzio! Yes, as you have noticed both are from the Frank Zappa's band. I as a freak of Frank Zappa they should be my favorite musicians unconditionally.

The intro starts with a simple guitar phrase, then immediately a quick ensemble from the second bar. I may not able to play the guitar part smoothly.

Then the powerful rhythm pattern with the power cord like riff from the 5th bar of the score. The problem is the 2nd beat of the 7th bar. It probably cannot be done with one foot so try it with a twin pedal or two bass drums. Stimulating and crisp heavy metal part. The band is united together and the heaviness is brewed. Such a drum pattern to be processed partially with double basses makes it more intellectual when compared with the pattern that keeps stepping on kicks.

I was underage at the time of the album. Now I remember that I was practicing this pattern a number of times and worried that I could not play it precisely. Next time I'm going to try if I can now play it like the teacher!