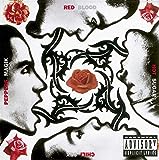 This is the basic drum pattern starts from the beginning of the song.

The tempo is about 73 bpm. The slow and heavy groove is very comfortable. The 16th note opened high-hat in the 1st beat may not be very easy to play staying your body in balance, but it is much essential to play it like that because it is the most important opened high-hat that definitely characterizes the song. Chad Smith performs the basic pattern quite stably that shows how skilled he is.

The ideal fill for all drummers to reach for

The stable groove continues and just before the chorus, we need to focus on that standard fill in the 2nd bar. An onomatopoeia representation in Japanese could be "Tan-takara-don". That is snare (with a flam occasionally) + snare + high-tom + floor-tom + kick. The fill is so perfect that I colored the notes with red. Although the fill is typical and ubiquitous, that sudden "Tan-takara-don" sounds real cool while we let our guard down to the slow groove. Its time, feel and notes distribution are perfect. This is the ideal "Tan-takara-don" which all drummers should aim. Before the second half of the chorus, there is "Tan-takara-don" at 2:23 (Tan-takara-don-don, to be exact.), which is perfect as well. In the chorus, from the 3rd bar in the score above, he then goes with the ride cymbal, and unlike the hi-hat pattern so far, kick and snare come in up/down beat on 16th note. Rather, is this his more favorite pattern? Also his stability free of hurry in this slow tempo is wonderful.

He is a professional

There's another nice little fill at the end of the song.

When the song comes to the climax, the fill with polyrhythmic accents and 32nd notes on the 2nd bar is a bit nice. It still proves his skill to keep the tempo without hurry even when it's time to release the wild instincts at this climax. Perhaps he pretends to be at climax to make the song feel good in a non-emotional manner. Yes, he is a real professional who can control his emotions by his own will.

« ​When you buy your new computer, you sh… YOU! Do the Reggae..! »
Search
Latest
Related Entries
Ranking
Recent comments
Monthly Archive
Profile