​I was surprised to find out that my colleague at work knew a professional drummer. ​And I never thought that I would have a chat with colleagues during my work break about odd meters, "TE-KAZ-OH", and his band FRAGILE. Professional musicians are all around us.

​When we had the chat, she took me to this interesting video.

Kozo Suganuma, known as "TE-KAZ-OH" which means the king of many strokes, plays drums on Pikotaro's PPAP. You see a heavy technical fusion drum performance that doesn't match for that light pop music PPAP at all! ​That big gap is an important point here.

When I thought it started to be cute, all of a sudden...

​I took a few bars from the begining: 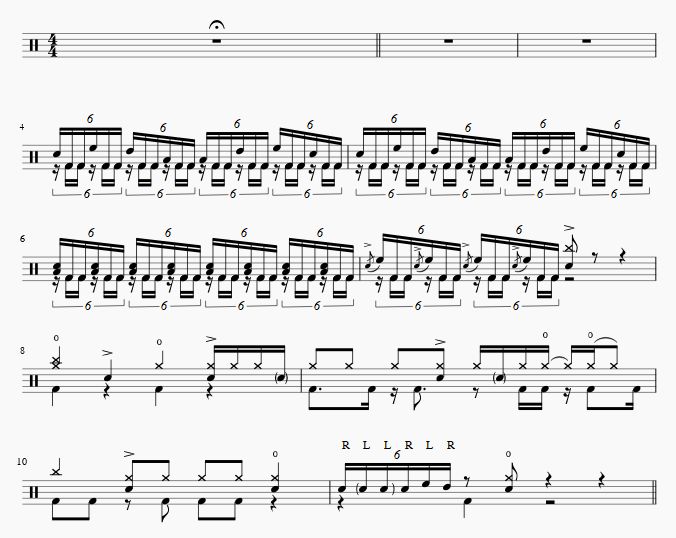 The sextuplets in the first 4th and 5th bars also entertain us with his stick twirling as shown in the video. ​The left hand moves in the order of snare > high-tom > low-tom > floor tom, and right/left kicks fill up between them to create 2 sextuplets. ​In the meantime, he twirls the stick on his right hand in idle. ​Next, on "the other hand", the right hand moves in the order of floor tom > low-tam > high-tom > snare, and he twirls the stick in idle. ​The R/L sequence is as follows:

That is a phrase that requires practice and preparation in advance because it could not be improvised instantly. ​When you think of the cute beginning of "Pi ko ta ro ohhhhhhhhhh, Piko!" it heavily starts like above. That is a big gap amazes us.

He's playing drums on his face as well

​More generally, the gap between ultra-fast technical performance and his smiling face is still striking. ​This smile sets him apart from other drummers. ​From around 0:58, the heavy metal pattern with sextuplet kicks is the best part of his dazzling smile. ​He is the king of many strokes who entertains the audience not only with his hands and feet, but also with his face. He has the fifth element for drum performance. ​I am so inspired by watching the video that I decided to practice to flash nice smiles during my playing drums.