What made me frantic though this time, let me explain a drum part in a game music! Let's introduce it with a view to playing it with a drum kit instead of computer sequencing.

When I was a child, I did not feel good or bad at all listening to music, no matter how much I was getting into a game. Meanwhile, I remember that the music in Final Fantasy V made me feel that was cool and good as a child. It might have been the timing when I grew little by little and began listening carefully to the music in games. Among the sound tracks of Final Fantasy V, "Battle With Gilgamesh" is living as a very popular and great song over time. At that time, I was already starting playing drums. I remember that I tried to play this on a drum kit, but I gave it up because it was too difficult.

The drum part of the song is sequenced like this! 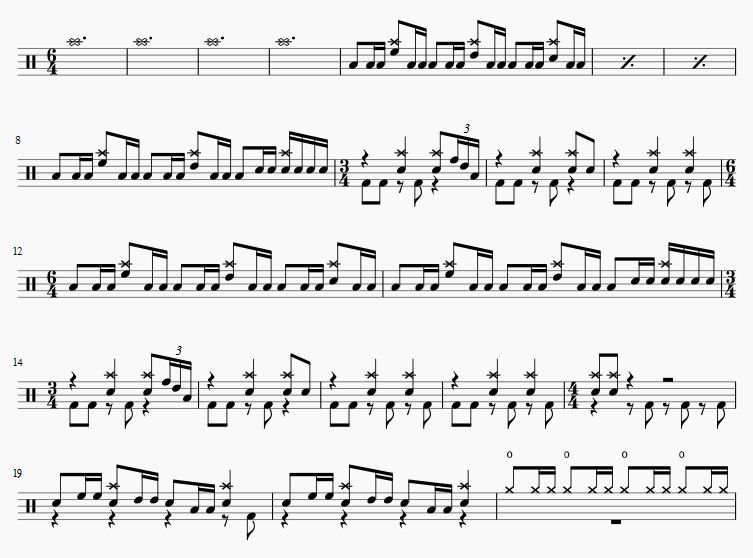 It starts with a machine digital phrase which somehow has a sense of elegance due to the sound like a pipe organ. In the tom beat from the 5th bar, cymbals overlap with toms and snare drums and no bass drums here. The pattern is not impossible to do this on your drum kit, but the quick movement of the left hand of tom and snare drum is needed and quite hard. As a workaround, play double bass on your feet and hit tom+cymbal and snare+cymbal with both hands then you can produce a sound like that.

The fill in 19th bar appears many times during the song. The fill has 4 snare hits on all the 4 quarter notes. Drummers might not create fills like that. Meanwhile the fill is a bit attractive with toms going from higher to lower. The cymbal in the 2nd/4th beat makes it considerably harder to play on a drum kit. A realistic solution is to replace those toms with bass drums.

Through the 21st bar the song moves from the intro to the next phase. The hi-hat's ticks express a sense of tension and the big move of the song. 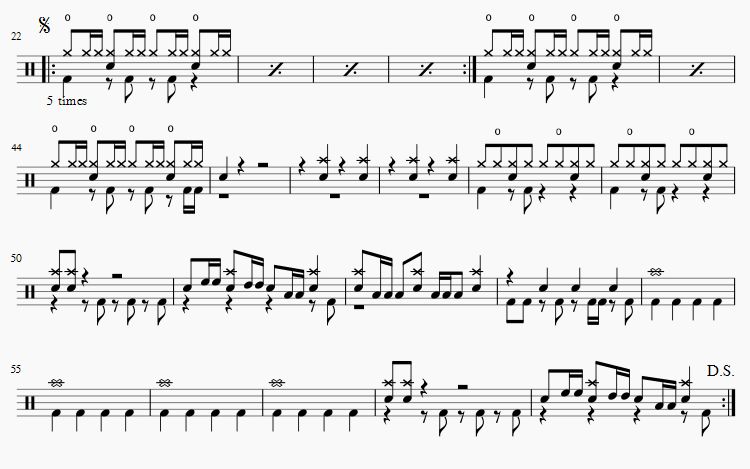 The open hi-hat drum pattern starts from the 22nd bar. At that time when I was a kid, I thought that it was entirely impossible for humans to play this part. In order to play that at this tempo, I strongly believed that I had to hit the third closed hi-hat in the left hand. But now I see it is not correct. The left foot makes the second hi-hat note to stop the open hi-hat ring, I can save one hand's hit here. I need only the first and the third hi-hats by the right hand. Because the tempo is quite fast, a stable coordination of limbs like Tony Williams is needed. In the songs "Fred" and "Mr. Spock" of Tony Williams LIFETIME he plays a very similar pattern which proves that humans can play that. 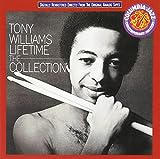 The part from the 22nd bar to the Dal Segno is repeated forever. The intro part till the 21st bar is only one time after you entered the Big Bridge (I'm talking about the game). If I remember correctly, it is a scene that the heroes' party goes scrolling upward and encounters some monsters, and finally faces Gilgamesh at the end of the event. Although Gilgamesh is supposed to be an enemy, he speaks a lot and you don't even need to defeat him. I think that such an event was epochal considering RPGs at that time. When I met him for the first time he seemed a big enemy so I attacked him with all my party's might without even hesitating Samurai's "Gil Toss" (Zeninage), but he only runs away after some turns. We only got slack jawed.

I have not played the Final Fantasy series newer than VIII and I don't know anything after that, but the song Battle With Gilgamesh appears a lot of times in the subsequent series arranged in many ways. Although I listened to a few on YouTube, no arranged version changed my best version. The best version would be the one when you played the game with enthusiasms. Tell me which version is your best!