Do you think we can fly... so this time Limp Bizkit doesn't need explanation.

Here comes the drum performance in the song My Generation from the album Chocolate Starfish and the Hot Dog Flavored Water. 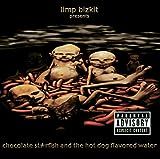 Chocolate Starfish indicates a part of female and Hot Dog Flavored Water is a thing male produces. I find it creepy around here in combination with the kind of disappointing illustration of the jacket. Don't worry, however, the recorded music is very good.

Here's the drum solo from the beginning of the song. Hi-hat is open all the time, but "o" mark supposed to be placed on the hi-hat notes are omitted from the score to make it more visible. 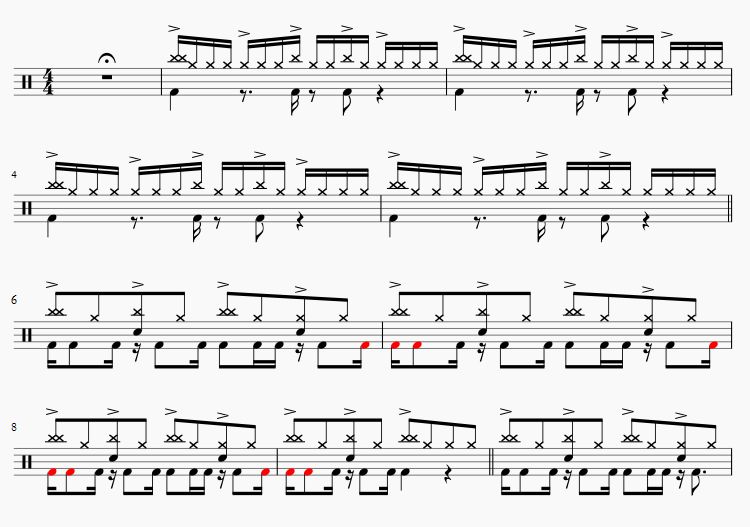 He strikes cymbals with both hands at the 1st beat and similar of all bars. 2 cymbal notes are written on the score where he strikes 2 cymbals. Check out the video of this song on YouTube to see how he moves. Meanwhile, if you want to enjoy and listen to the music itself, please listen to it recorded on CD or mp3 instead of YouTube. As lyrics of not only this song but most of their songs have a lot of F words and SH words, YouTube videos are censored to cut off songs frequently at good spots killing the power of songs.

It seems like just another heavy drum pattern, but the red highlighted notes in the score above cause a bit of a problem. If you look closely, you can see that he gives 3 successive kicks. Once you try it you may find; Oh, it is even harder than it looks! You could not play like that if you consciously kick the 3 notes. You can play it smoothly if you, how should I say, pretend that the 1st kick at the end of the last bar never happened, and the next 2 kicks just happened to be there. That is a bit curious kick pattern where how you recognize determines your success or failure.

If only we could flyyyyy, Limp Bizkit style. John Otto, take 'em to the Matthew's bridge!! John Otto, who is encouraged in the opening statement is the drummer. I thought that he has to be a stiff and proper drummer with a solid skill and that he is just pretending to be a bad guy whose songs are censored terribly. Then I checked him on Wikipedia. It was as I suspected. He studied jazz drums and he is skilled in Brazilian music, Afro-Cuban, Bebop, funk, and various other genres. There seems to be a lot of death metal musicians or like who have such a substantial background because their music is so technically difficult that they may have to practice hard and to dedicate themselves to their music.