Look at this rainbow psychedelic cover art! So let's look at "The Harder They Come" from their pretty early album "Colorcode" of Stevie Salas popular in his heavy psychedelic guitar play. 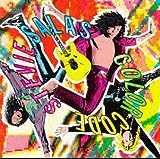 This song is under (two 16th notes = the 1st and the 3rd of a 16th triplet), that is Swing. I wrote in words because I do not know how to write it in the score by my music sheet software.

The intro part goes with a pattern of hi-hat open / close like 4 beat jazz as described above. Flat voices, "Hey", "Ah"... And the time has come. We rush into the next riff with a very simple and straight-hearted DA DA DA DA DA DA DA DA!!

The basic pattern is like above. Firstly the pressing and even comically annoying sound  comes to my ears. The sound of this age. It is somewhat an old sound mastering though its funky taste has not faded.

Also, as it is Swing, note that the interval between two 16th note bass drums is narrow. We need to have stable double kicks. Besides, in order to generate this funky swing groove, it is necessary to distinguish tightly the 3rd and the next 1st beat. Contrary to this wild sound, it requires delicate techniques in this fairly fast tempo.

By the way, I remember that a guy who is not a drummer said "The pattern is in odd meters". No, it is not an odd meter at all. It seems that the snare accents on the 4th beat of the 1st bar and the kick on 1st beat of the 2nd bar made him think that way. Perhaps he just wanted to say "odd meters". I sometimes hear people with various (musical) backgrounds saying "odd meters", but they are rarely the same to my definition. For example, even if playing a tricky play, such as giving accents on every 5 notes for 16th note sequences, is not odd meters as long as it is 4/4. How would you define odd meters?