Yes indeed, here we are! It's time for Frank Zappa!

Because the explanation will be long, I give it to Wikipedia or other sources, etc. for details of Frank Zappa. His music is well known as a lot of highly complicated and even esoteric songs. This time, I'm going to challenge the song "St. Alfonzo's Pancake Breakfast" having odd meters switching over a lot of times to make it hard in band's ensemble. There are a number of versions in Zappa's myriads of albums. The version released for the first time is probably from the album "Apostrophe (')" in 1974. 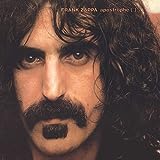 The song starts with a vibraphone solo. It is a mysterious phrase of Zappa's specialty. If I remember right, Zappa is shouting like "The phrase familiar to you all is going to come. The next song is St. Alfonzo's Pancake Breakfast!!" in a live stage recorded version. He certainly loved the phrase.

After the intro part is over, the song turns to "a tempo" and the drum part goes like this! 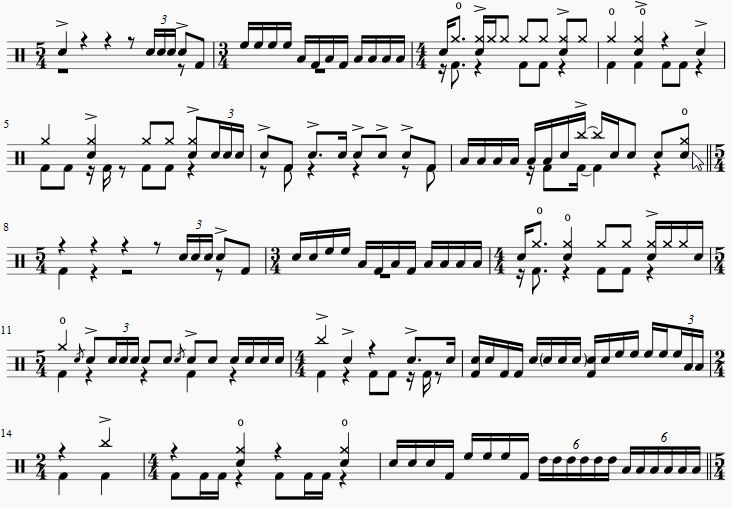 It took very much time to make the transcription. It is frustrating that the appearance of the score may not let you think so! How it divides beats may not be correct, I guessed it as much as possible from other instruments and sections than drums though.

As you can see 5/4 and 3/4 come out freely. The words of the first 5/4 are "At Saint Alfonzo's Pancake Breakfast". I think he wrote this part by giving priority on matching with the rhythm of the words. The nine syllables of words plus the first 8th note rest equals 10 8th notes that is exactly 5/4. Zappa simply never thinks about the pains of musicians to play his songs!

The kind of a pain in the drum play is right hand -> right foot -> right hand -> right foot in 16th notes, in the 2nd bar and the 9th bar. Would you insert it in this fast tempo! It seems to be the habit (automatic pattern) of the drummer Ralph Humphrey. If you do not have such a hand/foot habit, you have to prepare and pay much attention to this phrase. That is to trace a habit!

I will continue to write a transcription of the rest of the song. There must be no demand!