Here's what I have not been familiar with: The Mars Volta's Wax Simulacra. I thought it was a new song, but it was actually 12 years ago!! 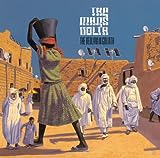 The Bedlam In Goliath

The drummer is Thomas Pridgen, whom I recently learned. In my spare time, I have been watching drum-related videos on YouTube for about a month. I came to this song through the following 4 steps.

Step2: Discovering a video that a drum lecturer explains how to play Gospel Chops.

Step3: The lecturer mentioned his favorite drummer is Thomas Pridgen.

Step4: The name The Mars Volta sounds nostalgic. What are they doing now? I have to take a look at them again.

Now, from the beginning of this song Wax Simulacra, he is doing something seriously hard. I checked it and it turned out going like this! 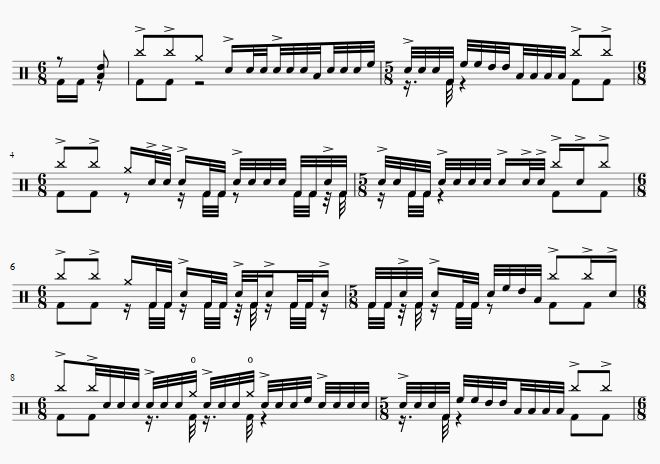 Simply the big problem is whether we can keep up with this speed. The kicks are woven smoothly between these 32nd notes, at this speed that hands can barely keep up. Yes, it's a linear phrase with lots of kicks that Gospel Chops drummers normally do. One of the characteristics of Gospel Chops drummers is that they control RK RK RK RK, RKRLKK RKRLKK, etc. smoothly and rapidly without hesitation, as a matter of course. In addition, since this intro has odd meters 6/8 + 5/8 (or 11/8) in that high-speed tempo, it is necessary to be much careful of the position of the accents with the band.

After that the intro ends and the basic pattern starts from the 11th bar like this: 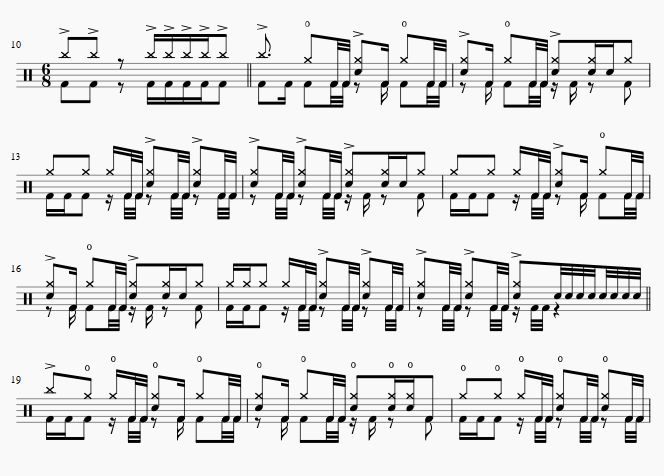 We get confused by the 6 + 5 odd meters in the intro, and as soon as the song started, it immediately turns into a sort of polyrhythm part. 12 pieces of 16th notes included in the 2 bars of 6/8 are divided into 3, and they are accented to make it shuffled beat. Since the vocal and the guitar go like the shuffled rhythm, it seems that the composer intended it rather than a suggestion from the drum. And don't forget to double kick 32nd notes just before every single snare accent. I really know it's hard, but he plays like that...

I wonder why I didn't know such a super drummer until now. I have completely untouched Gospel Chops in my last 30 years. I seem to have already been unable to follow trends. Something has to be done about that for my life. Gospel Chops are currently under my intense study. A research report is going to be released separately.