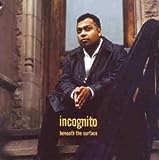 Beneath the Surface [12 inch Analog]

This time I am going to show you the drum solo part.

Before the drum solo, around 2:34, the base play switches to a fresh air samba latin style. It has a slightly different taste from the soulful verse, bridge, and chorus. This is a part that makes us anticipate a big turning point of the song.

The fresh air feelings come to end briefly (only 7 bars) and it rushes into the drum solo!

This is a small 8 bars journey but an important element of this song. The bass pattern of the beginning is repeated every two bars.

The impressive point is the flow from the polyrhythm phrase in the second half of the 3rd bar to the sixtuplets. A story which is spined by only the 3, tam, snare, and kick. People are born, live, and die. I feel like I heard such a story within the 1.5 bar.

Subsequently in the 5th and 6th bars, he blows "Ta, chii, chii" repeatedly. The drum solo is seasoned with the disorderly "Ta, chii, chii"s. Then, the thrilling sixtuplet pattern including double kicks suitable for telling the end of the drum solo comes out continuously.

We do not get bored at all. Four units (1 unit = 2 bars) are distinctive each other and colorful. When I try a 8 bars drum solo at this tempo without a plan, it normally makes the drum solo boring. Audience tends to lose their interest if the drum player is not conscious of making it to be divers. However, Professor Richard Bailey (the drummer of this song) might possibly try recording without making story in advance. I assume that his experience and intuition as a person playing music made the drum solo colorful as a result.

Another point is, as you may have noticed, the hi-hat that is always stomping in 8th notes. Although it may seem unimportant, this has a big effect for keeping the groove during the phrase of sixtuplets continues. This is a big deal. On the other hand, it is quite difficult in terms of technique to play in such arms-and-legs combination. The limbs movement is different between the sixtuplets in the 4th bar and in the 7th/8th bar, but it is his advanced technique that both are perfectly gathered on time. Praising. During the polyrhythm phrase in the 3rd and 4th bars, Richard got slightly rough and he stopped stepping on hi-hat. This momentary judgmental ability is also awfully great. Praising again.

Can you create a story with a non-melodic drum kit, in 8 bars given to the highlight of a song? It's the 8 bars where the true value of a drummer - no, of a musician can be evaluated.