Well, here introduce the songs of Jamiroquai's early days which is also nostalgic. The song "Kids" from the album "The Return of the Space Cowboy". It presents quite "tastful" drum pattern, if you are a drummer seeking groove you will definitely want to copy it upon listening to the song. 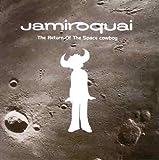 Return of the Space Cowboy

Meanwhile do not only pay attention to drums. Percussion is also participating in Jamiroquai's band.

Among the basic rhythm patterns, the tambourine rings effectively with 16 notes off beat, and the groove is greatly amplified. That does not simply match with "Ta, chii, chii". It's nice to be one beat earlier than "Ta, chii, chii". (The part above the drum pattern is of tambourine)

Drummers are apt to forget that it is not all that can be expressed with a drum set in the studio. We see tambourine of this song. You may put a clapper on it. You can be undressed and give out a sound by hitting your belly, or you can shout "Ta, chii, chii" verbally to the microphone. No, actually there is no necessity to make sounds. How about trying to sit still in the chair just before the drum set quietly? It is overkill from the concept of this blog so let's not continue this topic.