In my generation it is familiar to those who used to be guitar kids - Extreme is coming! It is quite difficult to follow transcendental guitar solos and funky riffs of Nuno Bettencourt (real name is Nuno Duarte Gil Mendes Bettencourt. I did not know.) 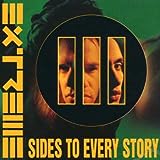 Oh I am a drum player. So, turning eyes towards the drum, Paul Gary's solid drum also blows mind of former drum kids. For example, dig this basic drum pattern in "Cupid's Dead" of their third album "III Sides to Every Story"!

Initially I thought that this must be computer's notes via DTM because it's too dry and accurate play. I was surprised to find out later that a human is playing it. I wondered if such a thing will become possible for me without difficulty when I grow up.

For beginners, the double kick (bass drums) can not be very easy to play in this funky solid feeling (especially the third beat of the second bar). Because it is included in the drum pattern, you have to make the 16 notes in the pocket every time through the whole song every time. That requires stable and reliable techniques.

This extremely dry and refreshing sound itself is also getting funky. Perhaps we can not make sound like that on live stages.

Nostalgic? I am very nostalgic.